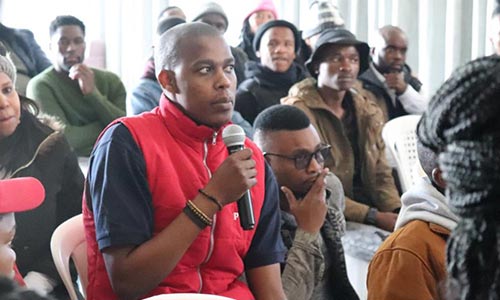 While engaging in those bruising conversations it is important that we be realists and understand that we cannot microwave social change, this, therefore, means that these difficult conversations are necessary and instead of viewing them as boxing matches, we should view them as conduits through which compromises and solutions will emerge.

Religious institutions were lambasted for being colonial, anti-women, homophobic and sexist institutions designed by imperialists to subjugate black Africans. Cultural institutions did not escape the wrath and were labelled along the same lines, with traditional leaders being singled out specifically for their homophobic pronouncements.

This immediately solicited an angry response from Christians who viewed it as a direct attack on their religion. This therefore divided the audience into two groupings: Christians and nationalists on one side; and secularists, LGBTIQ+ and humanists on one side, with neither listening to the other or being persuaded by the other.

This type of engagement is prevalent in South Africa, although there’s nothing wrong with frank uncensored discussions, particularly when they emerge from those who feel oppressed or victimised by power structures of society. Those expressing their lived reality cannot be punished for that, however, it is important that when moderating such discussions, a balanced and nuanced view is presented.

Lambasting religious and cultural institutions will not produce socially inclusive communities, neither will condemning other human beings to eternal damnation. As oppressive as religion or culture can be, it is important to understand its point of view and departure – as this will be crucial in finding where there could be possible compromises.

Although this is a philosophical point, it is important to make, because what we are dealing with currently is a typical human problem; as human beings we are born into a universe that doesn’t explain itself and that doesn’t have meaning, we don’t know where we come from, where we are going, why we are on earth [we are here] and who was here before us?

Religion and culture over the centuries have been crucial in attempting to answer those questions (whether those answers are true or not is another debate) and eliminated a great deal of uncertainty in society, thereby facilitating human development. In a sense, the God of religion has been very important to human history, both in creating meaning and as a source of love, forgiveness and a motive for morality.

Therefore any form of criticism levelled against religion or culture is perceived as an attack on certainty and to a general extent as an attempt to remove God. This is what Fyodor Dostoyevsky implies in his novel, The Brothers Karamazov, where he says, “God, if you do not exist then everything, is permissible” – therefore part of the fear is that once God is ‘removed’, it will be an anarchical free for all.

Although this is a very broad generalisation, it is the basis on which the religious and cultural argument is framed. Denouncing such an argument with insults is counterproductive and strikes a deadly blow to social inclusion because it shuts down the conversation. A point has to be made that certain aspects of religion and culture are oppressive to certain bodies and that highlighting that oppression is not an attack. There is nothing wrong with the religious seeking certainty, but they should be cognisant of the fact that what follows certainty like a shadow is cruelty and certain ways of holding faith are cruel.

A difficult question then arises of whether we shut down those who harbour sexist, racist and homophobic views and sentiments from public discourse or do we allow those views onto the discourse and engage them? This is a difficult question because in South Africa we are still grappling with a challenge of who has a right to speak on issues.

Hence it is important that we develop a creative morality, one which is anthropocentric in nature which places inclusion, rather than exclusion, as the default approach. Part of that journey involves us being radically provisional about the views we hold and being able to abandon them once we discover that they are wrong.

Prince Charles is a humanist, critical thinker and a member of the ACTIVATE! Change Drivers Network. A network of over 3400 diverse young people driving change for the public good across South Africa. Members of this network, Activators, are connected by their passion, skills, sense of self and spark to address tough challenges. This article does not necessarily represent the views of OUT LGBT Well-Being or its partners and funders.