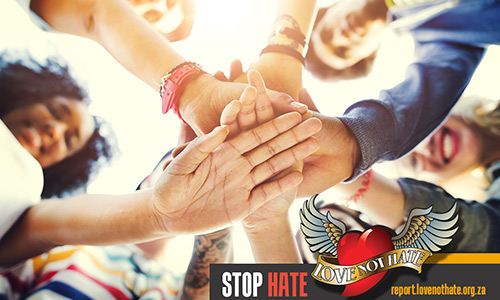 Our school days are a formative time that can have a major impact on our adult lives; affecting our sense of identity, self confidence and direction in life. That’s why it’s so troubling that many young LGBTQ people face extreme stress and rejection for simply being who they are.

In a 2016 national report, Love Not Hate (a national campaign targeting LGBTQ hate crimes) documented the disturbing scale of the abuse in South Africa. When people between the ages of 16 to 24 years were asked, more than half (56%) said they had experienced discrimination based on their LGBTQ status at school.

The situation in three provinces in particular stood out. An astonishing 79% of those surveyed in KwaZulu-Natal schools experienced discrimination, followed by the Eastern Cape (70%) and Western Cape (68%). Gay youth were the most affected, with 69% reporting discrimination. Not far behind were bisexual youth (60%).

The most common form of discrimination was verbal insults, with 55% of those under 25 years revealing that they had endured verbal attacks at school. Threats of violence were the second most common form (35%), especially amongst males (48%) and in the Eastern Cape (52%) and KwaZulu-Natal (51%).

For roughly a third of students, the verbal threats escalated into violence and / or property damage or destruction. Physical abuse primarily targeted gay and transgender students. For more than one in ten of the students, the discrimination took the form of rape or other sexual abuse.

Sadly, discrimination at times comes from those who should know better; the teachers themselves. In recent years there have been a number of incidents in which teachers and school officials chose to discriminate against students because of their sexuality or gender expression.

To make matters worse, many young LGBTQ people are still coming to grips with their sexuality or gender identity and are often not open about this to others. That means they’re afraid to report the bullying or abuse as this could out them; forcing them to endure the harassment in silence.

As social media and the internet extend their reach across South Africa, the phenomenon of cyber-bullying is also likely to grow. This is a pervasive problem in many countries and LGBTQ youth are often the targets.

The devastation of stigma, being marginalised, verbal abuse and violence cannot be underestimated. LGBTQ students may lose interest in school, drop out or even self-harm. While there is little information in South Africa on the topic, a 2017 study found that sexual-minority youth in the United States are much more likely to consider, plan or attempt suicide (40%) compared to their heterosexual peers (15%).

So, how should pupils deal with bullying or discrimination? Much depends on a young person’s support system, such as friends, family and teachers, but here are some general tips:

• If there is an adult you trust, tell them what is happening.

• Know that you have the right to be you, no matter what anyone says.

• Don’t respond to the bully or show emotions. This is often what they want.

• If you can, change your routine to avoid the bully / bullies.

• Reach out to a local LGBTQ organisation. They will give you advice and support.

• If the abuse is on social media, block the bully or abusers.

• Don’t lose focus on your goals and success. That’s what matters, not others’ opinions.

• If you have your family’s support, report teacher discrimination to the SA Human Rights Commission

• Remember: It will get better. There is a future after you leave school.

For more information, counselling or to speak to someone confidentially, contact Love Not Hate, Triangle Project in Cape Town, OUT in Pretoria, the Gay & Lesbian Network in PMB, or the Durban Lesbian & Gay Community & Health Centre.