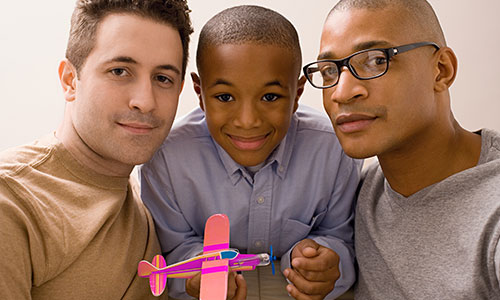 CHILDREN OF GAY PARENTS DO WELL DESPITE STIGMA

However, the study also warned stigma was an ongoing challenge for these children, and could have an impact on their health and wellbeing.

The research is based on data from the Australian Study of Child Health in Same-Sex Families (ACHESS), the largest of its kind in the world, which involved input from 315 same sex parents with a total of 500 children.

The results confirm and expand on early findings from the same data set.

The research revealed children in same-sex parent families had scores that were on average six per cent greater than the general population on measures of general health and family cohesion.

“These children are growing up in a range of family contexts formed in a range of ways; from previous heterosexual relationships, to assisted reproductive technologies and same sex co-parenting arrangements,” he said.

He noted that on most measures including temperament and mood, behavior, mental health, emotional role, and self-esteem children were equivalent to children from the general population however in areas of general health and family cohesion in particular, children with same-sex attracted parents were doing better than those in the general population.

“It appears that same-sex parent families get a long well and this has a positive impact on health,” Dr Crouch said.

“We know that same-sex attracted parents are more likely to share child care and work responsibilities more equitably than heterosexual parent families, based more on skills rather than gender roles. This appears to be contributing to a more harmonious household and having a positive impact on child health,” he said.

“Australian politicians and others still object to marriage equality and same-sex adoption based on arguments that children need to be raised by a married biological mother and biological father to do well.”

“This study shows that children can thrive in a range of family contexts and the ways that these families are constructed can bring their own particular benefits to child health and wellbeing,” he said.

Despite the positive findings however around two thirds of children with same-sex attracted parents experience some form of stigma due to their parents’ sexual orientation which impacts on mental and emotional wellbeing.

“Stigma can be subtle, such as letters home from school addressed to Mr and Mrs,” Dr Crouch said.

“Or it can be overt and very harmful, in the form of bullying and abuse at school.”

“What we have found is that the more stigma these families experience the greater the impact on the social and emotional wellbeing of children.”

He said however it was through improved awareness of stigma that these findings could play an important role in developing health policies that improve child health outcomes.

To further understand these results, future work will report on child perspectives of health, and via interviews with same-sex parent families explore issues of stigma and discrimination in more detail.