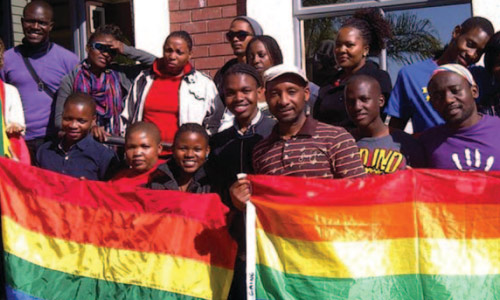 The report – Achieving an AIDS-Free Generation for Gay Men and Other MSM in Southern Africa – was released ahead of last week’s May 17 International Day Against Homophobia by InnamfAR, The Foundation for AIDS Research and the Center for Public Health and Human Rights (CPHHR) at The Johns Hopkins University.

It provides the first ever comprehensive analysis of the financing and implementation of HIV programs for gay men, MSM and trans individuals in six countries – Botswana, Malawi, Namibia, Swaziland, Zambia, and Zimbabwe.

It also emphasises the role stigma and discrimination play in undermining the fight against HIV in the region. In particular, the report highlights the negligible amount of funding provided by the two largest sources of international donor support for HIV: the US President’s Emergency Plan for AIDS Relief (PEPFAR) and The Global Fund to Fight AIDS, Tuberculosis and Malaria.

Despite clear policy commitments and recent progress in addressing the epidemic among this population, as of 2012 the majority of PEPFAR budgets contained few dedicated funds for these groups and only 0.07 percent of all Global Fund resources for HIV were targeted to them, said the report’s authors.

They admitted that reaching gay men, other MSM and transgender individuals for prevention, treatment and care programs is difficult and that some who are receiving these services may not be identified as members of these groups. They insisted, however, that dedicated services are needed to ensure these men and women have equal access to the programs being offered to the overall adult population.

The report also found that laws criminalising same-sex sexual practices persist in all of these countries despite nearly a decade’s worth of investment in HIV programs. Furthermore, widespread homophobia among government officials and religious figures remain a formidable barrier to the implementation and uptake of HIV programs.

In Swaziland, where HIV prevalence is the highest in the world at 26 percent, the Swazi government’s reluctance to address the needs of gay men, MSM and transgender people creates a challenging environment for tracking available HIV programs for this population, says the report. In Malawi, where approximately 910,000 people have HIV, many are unwilling to disclose their sexual orientation for fear of harassment, denial of healthcare, and arrest.

“This report shines a much-needed spotlight on the neglect of a population that is particularly vulnerable to HIV,” said amfAR CEO Kevin Robert Frost. “If we want to effectively combat the HIV epidemic in this region, we must implement programs that address stigma and discrimination.”

“For years it was asserted that gay men and transgender people didn’t exist in Southern Africa, but that’s simply not true,” said Owen Ryan, amfAR’s deputy director of public policy and a lead author of the report. “International donors have taken far too long to recognise and respond to HIV among these men and women.”

The report also includes recommendations for national governments, PEPFAR, the Global Fund, and other donors to address the needs of this population.

Chief among these is that national governments decriminalise same-sex sexual practices and support programs that reduce stigma and discrimination against marginalised groups.

It also urges funders to improve their processes, help countries to reprogram existing grants to address the needs of gay men, MSM and transgender individuals and to assist with technical expertise and staff to implement programmes that target these groups.

Despite harsh conditions, the report shows several examples of small, community-led organisations that deliver desperately needed programs to these men and women.

These include efforts by groups like the Lesbians, Gays, and Bisexuals of Botswana (LeGaBiBo) and the Botswana Network on Ethics, Law and HIV/AIDS (BONELA), which are strategic implementers of a national government plan to increase the accessibility and availability of condoms by removing barriers for at-risk populations.

In Malawi, the Centre for the Development of People (CEDEP) has conducted important epidemiological research on the prevalence of HIV among its MSM and the impact of stigma.

“We must go beyond what’s written in strategy documents and donor plans and work toward tangibly addressing HIV among men who have sex with men, and transgender people. It will be impossible for the US government to achieve its goals of an AIDS-free generation without this,” said Dr. Stefan Baral of the Johns Hopkins Bloomberg School of Public Health and one of the lead authors of the report.

The report can be found here.