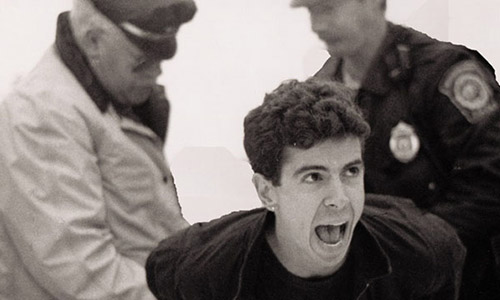 HOW TO SURVIVE A PLAGUE HEADLINES OUT IN AFRICA

The festival will take place from 12 to 21 April at Nu Metro V&A in Cape Town and Nu Metro Hyde Park in Johannesburg.

It boasts a selection of international award-winning films that cover all the bases; popular revolution, ballet, romance, drama, and an insightful look at a clash of cultures.

While OIA is celebrating its 20th year, it is also sadly facing uncertain times, with organisers warning that a lack of funding may see the event being suspended or cancelled.

The festival is calling on the country’s LGBT community to stand up and support its own to keep the event alive – or no-one else will (or should). One of the easiest ways for you to help is to apply for a new MySchool card, or to assign OIA as your beneficiary on an existing MySchool card, or Woolworths card. (Find out how here.)

“There are many causes competing for our compassion and money – but there is no one who will take care of LGBTIQ people if not you,” recently commented Constitutional Court Justice Edwin Cameron, the highest ranking openly-gay public official in Africa, who has backed OIA.

Featured prominently on this year’s programme is director David France’s HOW TO SURVIVE A PLAGUE. It’s a triumphant recounting of a popular revolution – the demand for treatment for HIV – that mobilised people in their thousands in the USA in the early days of the virus’ onslaught.

At the time, HIV/AIDS was seen as a “gay disease” as most of those affected were from the gay community. The epidemic was initially met with little to no response by the American government and pharmaceutical companies until activists forced action to be taken.

How to Survive a Plague uses precious archival footage and features such luminaries as Larry Kramer and Bill Clinton, and the less luminous George H.W Bush and Jesse Helms.

Other films in the line-up include:

ZENNE DANCER, a beautifully shot drama that exposes the harsh traditions of Turkish culture – the power of the army, religion and the sanctioned horror of the family ‘honour killing’.

Director Céline Sciamma’s TOMBOY is an exploration of mistaken gender identity in a 10-year-old and the freedom, pleasure and pain that it brings. Her first film, Water Lilies, was included in the 2007 Cannes Film Festival’s Un certain regard selection.

SWAN LAKE 3D is a gender-bending version of the Russian ballet classic. The production’s been around the world four times, and garnered 30 international theatre awards, including a Tony. Here it is in vibrant 3D on the big screen.

Director Joshua Sanchez’ FOUR delivers an assured début. Based on award-winning playwright Christopher Shinn’s play, this intelligent examination of two relationships does not eschew issues of desire, age or race. Neil LaBute, award-winning director of In the Company of Men and Your Friends and Neighbours, is the Executive Producer.

BEYOND THE WALLS (Hor les murs) was selected for the 2012 Cannes Critic’s Week. It examines the shifting dynamics in a relationship. The finely drawn characters, and appealing performances from the leads, enhance this depiction of a gay relationship.

LOVE OR WHATEVER tells the story of Corey, a psychologist whose boyfriend runs off with a girl. Abandoned, Corey mopes and bends the ear of his incorrigible, seriously non-monogamous lesbian sister. When the perfect man presents himself, can Corey see beyond the candy wrapping?

The festival will host two international guests, Director Mette Kjærgaard and writer Jenny Lund Madsen, who will present their short film Chloe Likes Olivia. While in South Africa, they will be running two filmmaking workshops in Joburg and Cape Town.

For a full schedule, details on the workshops and how you can support Out In Africa, visit the website at www.oia.co.za.